In 1385 Kastoria passed from the hands of its Albanian rulers (1371-1384), the Mouzakis family, into those of the Ottoman Turks who, being well aware of the commercial and military importance of its location, granted its citizens privileges and administrative autonomy.

In the early centuries of Ottoman rule (15th-16th c.), Kastoria was one of the four most populous cities in the Balkans, with a population that was mainly Christian. Those years of peace and security favoured the further growth of the walled city, which by the middle of the 15th century was a flourishing place, with many different trades practised there, among them tailors, goldsmiths, saddlers and furriers, each with its own quarter. Its economy was based on farming, stock-raising, fishing, silk, metals, and furs – the sources record that circa 1520 there were seven hundred (700) family fur businesses in Kastoria.

Economic prosperity, trade and open communication with the major centres of the Balkans, the Adriatic and Venice all played a role in making Kastoria an important artistic centre, while at the same time enabling its citizens to commission works of art, according to the age and their own means. The donors and patrons of this age included humbler citizens as well as members of the local aristocracy, priests, monks and the higher ranks of the clergy.

In the following centuries (17th-18th c.), Kastoria grew and prospered greatly. By the middle of the 17th century its furriers were trading with Constantinople, Syria, Persia, Egypt and Russia. After 1749, when peace between Venice and the Ottoman Empire opened the Balkans to trade and travel, the fur traders prospered even more. They helped create a dynamic middle class in Kastoria, who built themselves handsome houses that on the one hand display a wise and well-balanced relation with their environment and on the other attest to the wealth and cosmopolitan character of the city’s Greek population.

The many churches that were built during the course of those centuries (15th-18th) spurred the production of icons and other ecclesiastical treasures, a splendid selection of which, numbering thirty-five (35) in all, is presented in this unit. 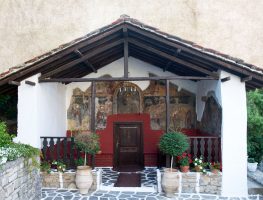 The Church of Aghios Minas 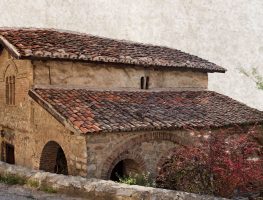 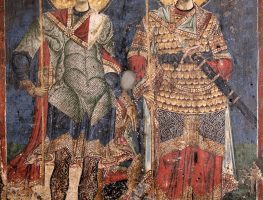 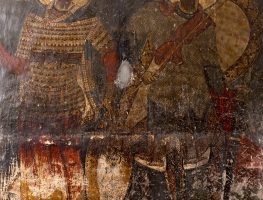 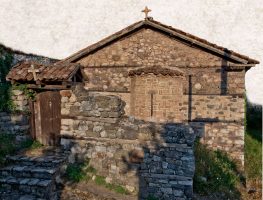 The Church of Saint John the Baptist (located in "Apozari" district) 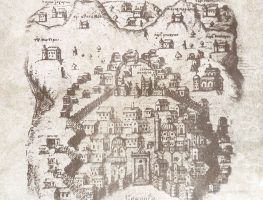 Depiction of Kastoria which is derived from a printed image