The Byzantine Museum of Kastoria, which occupies premises built in 1985, was inaugurated in 1989 and remained open until June 2013. During that period it housed an ‘interim’ exhibition in one of its three galleries.

Due to its temporary nature, that exhibition had certain basic weaknesses and deficiencies, mainly in supplementary material and interpretive approach. The result was that it did nothing to project the importance, the fame and the influence of the celebrated mediaeval city of Kastoria, or its unique wealth of splendid icons. That was why the then newly established 16th Ephorate of Byzantine Antiquities (EBA) joined forces with the Directorate of Museums, Exhibitions and Educational Programmes (DMEEP) of the Ministry of Culture to prepare a proper museological and museographic study; this was approved by the Central Archaeological Council in 2010. That study, which was implemented in the new exhibition, together with the Museographic maturation study – Proposed interior renovations for the functional and aesthetic improvement of the premises of the Byzantine Museum of Kastoria, was included as a project in the NSRF – ROP Macedonia programme by Decision 4728/4-12-2012, with a total budget of 1,870,000 euros.

The new exhibition material focuses mainly on panel icons and sanctuary doors, of which there are seventy-five (75); there are also five (5) fragments of frescoes, and thirty (30) other items, examples of the minor arts. The inclusion of this material was reviewed and proposed in a report based on the following principles, consonant with contemporary museological and museographic practice: 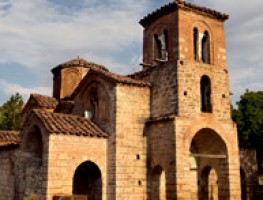 Interactive map of monuments and churches

Useful information for your visit