This collection includes five (5) panel icons and one (1) segment of an iconostasis, all products of the Cretan School and thus proof of Kastoria’s contacts with the Venetian-ruled regions of the Ionian islands and the Italian cities on the Adriatic, and indeed Venice itself, beginning in the second half of the 15th century and especially its last two decades. It is worth noting that of all the cities in Macedonia, only Kastoria and Siatista have works by Cretan painters.

In the icon of the Virgin Madre della Consolazione (=Mother of Solace), painted towards the end of the 15th century, which comes from the church of Panaghia Zoodochos Pege in the Evrais district, the Virgin is painted in a Western iconographic type, which Cretan painters reproduced many times, to meet popular demand, and which is widely found in Orthodox as well as Catholic churches in the Venetian-held regions.

One of the oldest Cretan icons in Kastoria is the Christ as Great Judge (15th-16th c.), which comes from the church of Aghios Georgios in Mouzeviki. Iconographically, the type of the enthroned Christ Pantocrator is associated with works of the famous painter Angelos, of the 15th-century Cretan School, while the character and technique of his works are reproduced in its stylistic characteristics.

The icons Virgin Hodegetria and Christ Pantocrator (first quarter 16th c.) from the church of Aghios Demetrios in Eleoussa are signed by the painter Ioannis Permeniotis or Parmeniatis. These important icons, which retain all the idealistic features and the general style and character of the Cretan School, were painted to order, for either a church leader or some lay benefactor, by the Greek painter, who was working in Venice or its environs.

The icons of Christ Pantokrator and the Virgin Hodegetria with the legends Ι(ΗCOY)C X(ΡICTO)C Ο CΩΤΗΡ [Jesus Christ the Saviour] and Μ(ΗΤΗ)Ρ Θ(ΕΟ)Υ Η ΟΔΗΓΗΤΡΙΑ [Mother of God the Hodegetria] come from the church of Aghios Demetrios in Eleoussa. Given their size (96 x 69 cm) and subject, they must have been “despotikes” icons from the church’s iconostasis. They were painted in the first quarter of the 16th century and are signed, at the bottom, on the gold border, by Ioannis Permeniotis or Permeniatis: ΧΕΙΡ ΙΩ(ΑΝΝ)ΟΥ ΤΟΥ ΠΕΡΜΕΝΙΩΤ(ΟΥ) [by the hand of Ioannis Permeniotis].

Ioannis Permeniotis is mentioned in the Venice Archives in 1523. He signed the icon of the Virgin Enthroned with St John the Baptist and St Augustine, which is in the Museo Civico Correr in Venice, in Latin capitals: IOANES PERMENIATES/ P. We know neither where he came from nor when he went to Venice, but according to documents in the Venice Archives “Zuan Permeniatis depentor” paid his dues to the Greek Community of Venice in 1523. Permeniatis is also credited with the icons of St Peter, St Francis and St Dominic in the art museum in Vicenza, of the Virgin in the iconographic type of the Pietà in the Accademia in Venice, and of the Adoration of the Magi in a private collection in Athens.

Judging by the corpus of his work he would appear to have studied, around 1500, with the great Venetian painters of the day, including Giovanni Bellini and Antonio Vivarini. This had a lasting impact on him, and led to the development of a personal style in the spirit of Venetian syncretism. He was also adept at painting in the spirit of Byzantine tradition, as we see in the icons of Kastoria. His icon of Christ Pantokrator is iconographically and typologically identical to the one in San Giorgio in Venice, which dates from the first half of the 14th century, a further indication of his presence and professional activity in that city. These icons were very likely painted in Venice, as a commission, and sent to Kastoria.

This collection includes works that are part of what is known as the School of Northwestern Greece, which exemplifies the anti-classical trends in post-Byzantine painting. The workshops of this school were active in Kastoria from the end of the 15th to the end of the 17th century. They decorated many churches, among them Panaghia Rassiotissa (1553), where the mural decoration is attributed to the famous painter Frangos Katelanos, the chapel of St John the Theologian in the Mavriotissa Monastery (1552), Panaghia of Apostolakis (1606), Aghios Nikolaos of Thomanos (1639), and Aghios Nikolaos of the Lady Theologina (1663).

One particularly interesting exhibit is the 16th-century icon of the Virgin Caressed by her Parents from the church of Aghios Nikolaos of Kyritzis, a relatively rare subject, depicting St Anna and St Joachim embracing their young daughter. Another is the Annunciation from the church of Panaghia Zoodochos Pege, painted in the same period, which combines the familiar characteristics of the School of Northwest Greece with lingering echoes of the idealism of the Cretan School. The icon of St George with scenes from his life (16th c.) from Aghios Georgios on the Mountain, which was probably its votive icon, with the full-length figure of the saint in the middle framed by eleven scenes from his life, can confidently be ascribed to the priest-monk Efstratios, who painted (and signed) the icon of St Panteleimon with scenes from his life in the Museum’s collection.

One of the most important icon-painters of the 16th century was Onoufrios, who is represented in the Museum by two fragments of mural decoration and one panel icon, from the churches of, respectively, Aghioi Apostoloi and Aghioi Anargyroi tou Gymnasiou, both in the parish of Eleoussa. In his work we find all the qualities of Palaiologan art combined with the eclectic preferences of the Cretan School of the late 15th to mid 16th century. Recent research work has shown that Onoufrios learned his trade in Venetian workshops, and later decorated churches in Albania and what is now FYROM, where his presence is attested by at least eight complete programmes and a substantial number of panel icons.

In Kastoria he decorated the churches of Aghioi Apostoloi (1547) and Aghioi Anargyroi of the Gymnasium (after 1547) and painted many panel icons. Five icons in churches and in the Museum’s collection are attributed to him. The sole patronal inscription with his signature in Kastoria, in Aghioi Apostoloi, exemplifies the scholarly, ecclesiastical education and superb calligraphy of the painter and priest.

The “School of Kastoria”, which on the basis of dated monuments was active for a period of about thirty years (1481-1510) in Northern Greece (Macedonia and Thessaly), Mediaeval Serbia and Bulgaria and whose influence spread as far as Romania, was the most important artistic movement of the period in the Balkans. From the artistic point of view the Kastorian school followed traditional Byzantine iconography but with a tendency to innovation, introducing elements of the everyday life of the period along with elements of the Late Gothic art of the 15th century and the textile tradition of the East.

The painting of this school is preserved in seven churches in Kastoria: in the remains of the mural decoration of Aghios Spyridon (1490/1500), the frescoes of Aghios Nikolaos of the Nun Efpraxia (1485/6), part of the painted decoration of Aghios Nikolaos of the Lady Theologina (1490/1500), part of the painted decoration of Panaghia Rassiotissa (1480-1490) and Panaghia Koumpelidiki (1486), the frescoes on the north wall of Aghios Nikolaos of Magalios (1505) and traces in Aghios Demetrios in Eleoussa (early 16th c.). The three fragments of wall-paintings exhibited, which come from the ruined church of Aghios Spyridon (1490/1500), and the other exhibits – icons of St Paraskevi displaying her severed head and of St Panteleimon (the main face of a double-sided icon) and the three bema doors with the Annunciation – illustrate and demonstrate the role of Kastoria as the most important centre of the artistic current of the period, not only in Macedonia but in the Balkans.

Preservation and presentation of the fixed and movable monuments of Kastoria

This unit focuses on the post-Byzantine art of Kastoria. Its main object is to present the workshops that produced it, the artistic currents that influenced them, and some practical aspects of its production and circulation in Kastoria and the broader region of Macedonia and the Balkans. Mobility, whether in reference to Kastoria or to Western and Greater Macedonia, presupposes commercial and artistic exchanges and communications of all kinds. It was favoured by the conditions of peace and stability that followed the Ottoman conquest and the entrenchment of Ottoman authority, especially in the second half of the 15th century, when the channels of communication between Macedonia and the West, the Venetian-ruled islands of the Ionian and the Dalmatian and Italian coasts, were restored.

A second theme of this unit is the conservation of paintings and painted monuments, the restoration of the city’s churches and mansions, the necessary and highly specialised work of preserving, presenting and promoting them. 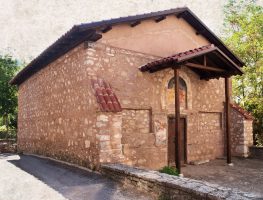 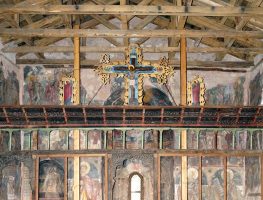 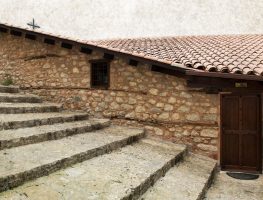 The Church of Aghios Nikolaos of the Nun Efpraxia 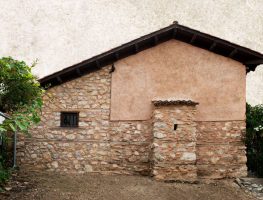 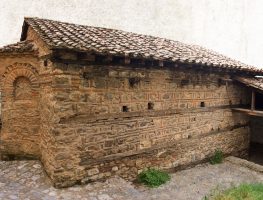 Aghios Nikolaos of Magalios: the main pictorial decoration was created by the "Workshop of Kastoria"