In the middle of the 6th century, a hundred years after the destruction of the rich and flourishing city of Diocletianopolis, the emperor Justinian founded a new city over the ruins of ancient Keletron, a few kilometres north of Lake Orestiada. This was Kastoria, which was to become an influential regional centre of mediaeval Hellenism, not just in the days of Byzantium but for centuries afterwards, under the Ottoman Turks. We know nothing about its size and organisation in the Early Christian period, only that there were walls at the west side of the peninsula, the only one which was not protected by the lake.

From the Early Byzantine period the relief of the surrounding terrain, the city’s strong and privileged position (guarding the frontier on the road from the West) and its natural beauty made Kastoria the object of constant imperial attention and at the same time a cultivated centre of remarkable intellectual and artistic activity. The Byzantine city prospered and flourished because it was open to the most important centres of the empire (Constantinople, Thessaloniki, Ioannina), the West (the Italian port cities on the Adriatic) and the Balkan hinterland.

The economic, intellectual and artistic blossoming that began in the 10th – 11th century lasted for another three centuries and for Kastoria the 12th, 13th and 14th was a splendid and extraordinarily productive period, as is apparent in its many surviving churches.

The inscriptions in the churches and the portraits in their wall-paintings provide unique and invaluable information that sheds new light on the city’s ecclesiastical and secular leaders. In the past, misinterpretations of source material led to the view that Kastoria was a place of exile, and that those who built its monuments had been banished from the imperial capital. However, comprehensive study of the sources showed that the founders of Kastoria’s churches were representatives of the local aristocracy and were often related to the aristocracy of Constantinople.

The list of founders and renovators of churches and donors of individual scenes and portable icons, includes titled members of the local nobility, officials with roots in Constantinople, and bishops, priests and monks. There are, also, foreign conquerors, Bulgars, Serbs and Albanians who imitated the Byzantine manners of their new city and played an active part in its life. In one monument, the Mavriotissa Monastery, there are portraits of emperors, who are associated with its renovation.

The superior artistic quality of the wall-paintings, the choice of iconographic programme, and the faultless metrical inscriptions executed in exquisite calligraphy reflect the social position of the donors, who are closely associated with similar circles in Thessaloniki and Constantinople, and are directly linked to the economic and social rise of local rulers in other Byzantine cities of the Middle and Late Byzantine period, as a result of the Comnenian reforms.

Donations and the commemoration of the donors in inscriptions in churches were on the one hand a means of advertising their social prominence and prestige, and on the other an act of piety. Thus, social display and the need to entrench a family’s power are often linked to the soul’s mystic need for salvation and eternal life.

Female Saints in the Churches of Kastoria

One remarkable feature of the churches of Kastoria is the presence of so many female saints depicted full-length in the narthex of the city’s Middle Byzantine churches. This is evidence of the particular honour in which they were held by the local population, and these popular subjects continue to figure largely in the iconography of the Late Byzantine and post-Byzantine periods. These saints are for the most part depicted as martyrs, cross in hand. The two exceptions are St Marina, who is portrayed, in an older iconographic type drawn from her life, killing the demon with a hammer, and St Photeini, who is in an attitude of supplication, hands apart and arms outstretched.

St Marina, who was beheaded for her faith, is a very popular subject in the decoration of churches in the archdiocese of Ochrid and in the Balkans generally, but especially in the city of Kastoria. The other female saints who appear equally frequently are:

St Barbara, who was beheaded for her Christian faith by her own father, a pagan magistrate, is depicted richly dressed, with a white veil and a gemmed diadem, betokening her aristocratic origins.

St Kyriaki, who dedicated her life to Christ and was beheaded during the reign of Diocletian, is also dressed in queenly manner, as befits her noble status.

St Photeini, known as the Samarian woman from the life and miracles of Christ, who believed His teachings and died for her faith, having performed many miracles, is depicted finely dressed, with a white veil, a gemmed diadem, and earrings of the same design.

St Theodora of Thessaloniki, who is the city’s patron saint, is portrayed in the habit of a nun, holding her martyr’s cross in her right hand. She was the first female saint from whose relics flowed scented oil, for this attribute was first attested before the time of St Demetrios.

St Julitta, who is depicted with her small son Kerykos, according to the standard iconographic type, came from Iconium and was martyred during the period of the Diocletian persecutions. Her son had been arrested and sentenced to death in an attempt to persuade her to abjure her faith, but Julitta remained firm and was beheaded. Here she is depicted dressed simply in tunic and mantle, veiled, cross in hand.

Self-reliance and self-protection in a period of political instability

Kastoria is a natural stronghold, being almost entirely surrounded by the waters of the lake. It was additionally defended by strong walls from the time of Justinian to the days of Ottoman rule. Anna Comnena describes the fortified city in the Alexiad, her history of the life and reign of her father, the emperor Alexios I Comnenus, where she narrates his recovery of the city from the Normans (1085): “There is a lake, called the Lake of Kastoria, into which thrusts a promontory, which broadens at the tip into rocky hills. Built around this headland are towers and curtain walls, creating a fortress known as Kastoria…”

The most important section for the defence of the city is the cross-wall covering the northwest side. This fortification began on the north side, reached a point in front of the present City Hall, continued towards Plateia Davaki, where the main city gate was, and ended at the south shore of the lake, passing through the Ottoman mendrese (seminary).

Segments of the fortifications still remain, mainly from the citadel and the cross-wall. The style of building revealed in the deeper layers, which came to light during excavation operations, dates them to the reign of Justinian (6th century). The interior wall on the headland was built later; according to historical sources, it was in place by the 11th century.

The fortified enceinte was rebuilt many times over the centuries. During the Ottoman years the walls across the neck of the headland were repaired, while the inner wall was neglected. The very interesting descriptions of the fortified city left by the Turkish traveller Evliya Çelebi (mid 17th century) and the French traveller François Pouqueville (1806) show that it changed very little in the post-Byzantine period.

The depiction of Kastoria in a now lost paper icon of St Nicholas printed in the middle of the 18th century, records the shape of the fortified city, with its citadel, and confirms the presence of the inner wall on the east side, which according to the English traveller Colonel Leake (1777-1860) separated the Turkish quarter from the Christian.

Form of the city – Neighbourhoods

Most of our information about the form of the city comes from the post-Byzantine period. It seems, though, that Kastoria changed very little during the Ottoman years, retaining the traditional form of a walled city. The heart of Byzantine Kastoria lies within the citadel, where we find the older churches of Panaghia Koumpelidiki, Taxiarchis Oikonomou, Aghios Demetrios and Aghios Alypios. This is where the Ottoman Turks settled when they occupied the city, as is clear from the fact that most of its Turkish monuments are found within the enclosing wall.

The presence of Byzantine churches outside the fortification shows that this area was inhabited in the Byzantine age. The most densely built area outside the Byzantine walls was the Eleoussa district in the centre of the promontory, while new settlements sprang up around Apozari in the 14th and 15th century, after the Christian population was evicted from the citadel. The southern neighbourhoods, towards the lake, were developed in the final years of Ottoman rule, when most of the city’s fine mansions were built.

The lake was a reference point for the city and a crucial element in its life, providing it with food and other necessities and orienting its development, as new settlements grew up on its shores and new houses, usually of two storeys, were built facing it, giving Kastoria the air of a maritime city, an impression reinforced by the many churches dedicated to St Nicholas.

Today the city districts are defined by the law of 1932. On the south side of the city, running west to east by the lake, are the districts of Mitropoleos, Dragota, Karydi and Servioti. In roughly the centre of the promontory are the districts of Evrais and St Thomas (or Mouzeviki). In the northeast, extending to the lakeshore, are Eleoussa, Aghioi Anargyroi, Aghios Panteleimon and Aghios Loukas, while outside the walls is the Oikonomou district. The Turkish names of the neighbourhoods within the walls – Kulé, Tabarhané and Kursumli Çami – have been abandoned, while the Jewish quarter survives in the name Evraika. 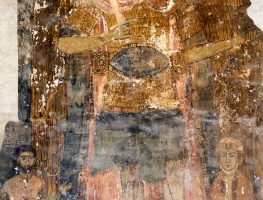 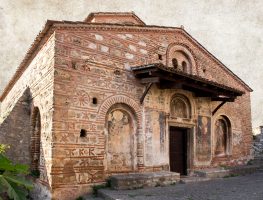 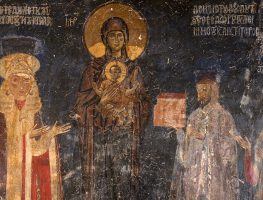 The founders of the Church of Aghioi Anargyroi: Theodoros Limniotis and Anna Radini 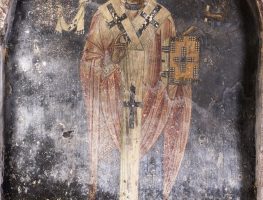 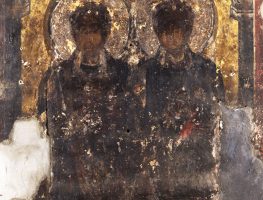 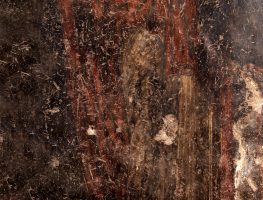 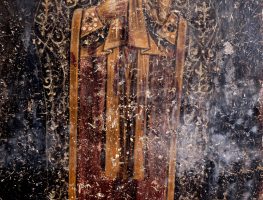 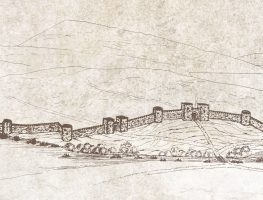